Saturday night ended with dinner and more discussion with the Peak Racing coaches in a conference room at the hotel.  During dinner we heard from Coach Josh and Coach Chuck on nutrition and hydration.  They both spoke about how they fuel, and some of the different products out there as well as glycogen stores in your body and how your training HR zones affect your energy source.  70.3 races are a different animal, and learning to fuel and hydrate for them is much different than half marathons, Olympic triathlons, and sprint triathlons.

Next up was Coach Valentin.  He seems to be pretty quiet, but once he started talking and demonstrating, he was hilarious.  He’s Peak’s running specific coach.  Valentin talked about dynamic stretches we should be doing before we run, and he went over the four major muscles used during running and a dynamic stretch for each while demonstrating each exercise.  Next, he covered form and what he’d be looking for on our run in the morning as well as some stretches we should all be doing after every run.  We won’t discuss how often I did stretch before or after running, but since my last injury, stretching along with strength training is something that I’ve been trying to stay on top of.  It only took 2 years of battling injuries on and off to finally cave, but I don’t do dynamic stretching prior to running, so it is something that I will be trying to add.  I guess 4:30 AM runs are going to become 4:15 AM runs.  Who needs sleep anyway?

Tony had some more prizes to give out, so he quizzed us on the information presented, and 3 people each won one 1 on 1 session with one of the 3 coaches who had spoken.  He also gave away some hats, visors, and water bottles.

After dinner, I headed to the room to prepare for Sunday’s run and to get some sleep.  We were meeting at 7AM at transition, so my alarm was set for 5:30AM.  It had been a long day, and I was ready for bed.

Sunday morning I met Wayne in the hotel lobby at 6:45AM to head to the transition area.  At 7AM, Tony gave us an overview of how transition has been set up in the past including where the wetsuit strippers typically are, where the entrance is, how the racks are set, where the exit is, etc.  He then told us the 3 pace groups, and the coach that would lead each group, and we headed to the parking lot for Valentin to lead us in the dynamic stretches he’d shown us Saturday night before starting our run.

Valentin leading us in a warm up

After our dynamic stretches, we headed out for our slow warm up.  I’m pretty sure teeth pulling by the dentist without pain meds would have been more tolerable for at least one of the faster runners if not more.  Adam has one speed, fast, so a slow warm up is not in his vocabulary.  He’s been known to start 30 minutes after our local run group and still finish before most if not all of the other runners.  A slow mile one, then everyone was off. 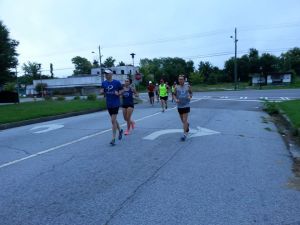 Josh in the gray shirt trying to keep Adam in the blue slow. 😉 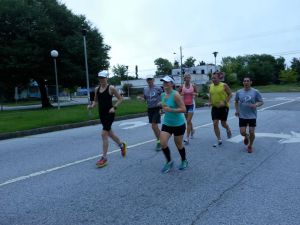 Valentin in the gray Peak shirt on the right

Since the course is 2 loops of smaller loops, it was pretty easy to run any distance you wanted, and we had people running all different distances.  Coach Chuck had 10-13 miles on my plan, so I had figured I’d try to do 10 since I hadn’t ran over 7 on a long run yet, and I had ridden 11 miles longer than my longest ride to date Saturday.  I was expecting to be sore Sunday morning, but that nutrition and hydration thing I was talking about….well, I think it made a difference because I felt great Sunday morning which was a completely different feeling for me after a long ride workout.  Clay was using a 4:1 run:walk method, so I decided to stick with him.  We also had Olivia and Meghan hang with us as well.  I finished with 11.5 miles feeling like I could have kept going and picking up speed.  It was a good indication for me that I am ready for this HIM.

After the run, we discussed the course briefly.  It’s a pretty easy flat to false flat course with few turns and some long straight stretches, so there’s not really much to it technically.  We also discussed pacing and how to start slow, and when we should decide to start picking up the pace.  Tony still had a few more prizes to give out as he quizzed us, then it was a quick wrap up before we all headed to the hotel to grab showers, pack, and check out of the hotel.

Overall, the weekend was awesome with a great group of coaches and people.  Everyone was supportive and encouraging to each other, and I actually think I might not be as miserable as I had thought I would be during the half ironman.  I still have to try my nutrition a couple of more times in the heat to make sure my electrolytes are correct, but other than that, I’m feeling pretty ready for the race, much more so than I was last week.  One of the big advantages to this camp was obviously working with the Peak coaches since that’s who coaches me, but also the size of the camp.  It allowed lots of time for one on one questions and direction from the coaches.  If you’re doing the Augusta 70.3 next year, then I’d suggest you look into the Peak racing training camp.  http://www.peakracingteam.com

Group photo at the end of camp

This mom's journey to getting fit!